Mathillo Mailung Khola Jalvidhyut Aayojana (MMKJA) is a 14.3 MW run-of-river (RoR) project located in Uttargaya Rural Municipality ward no: 1 (previously Haku and Dadagaun VDC), Rasuwa District, Bagmati Province, Nepal. The Project is being developed by Mathillo Mailun Khola Jalvidhyut Ltd. With its head office located at Shankha Park, Dhumbarahi, ward no. 4 Kathmandu M. C., Nepal (hereinafter referred to as “the Employer”). The license boundaries of the project area extends from 28º 08’ 00” N to 28º 05’ 56” N, and 85º 11’ 00” E to 85º 13’ 00” E. The project diverts Mailung River with a watershed area of 72 km² at the proposed intake.

The proposed headworks of MMKJA comprises boulder lined weir, gated undersluice, side intake with two orifices, gravel trap, approach canal, and a two chambered Settling basin. An inverted D-shaped headrace tunnel (HRT) immediately follows the settling basin. An underground Forebay is proposed at the end segment of headrace tunnel about 157 m upstream side of the HRT outlet portal. An underground steel penstock pipe with two vertical shafts and a horizontal penstock pipe will convey water from underground forebay to surface powerhouse which accommodates two generating horizontal axis Pelton turbines. After generating power, the diverted water will be discharged back to Mailung River through a tailrace culvert. There will be 11/132 kV switchyard beside the powerhouse. From the switchyard, the generated power will be evacuated to Integrated Nepal Power System (INPS) through an 11 km long, 132 kV transmission line up to Trishuli 3B Hub Substation of Nepal Electricity Authority (NEA) which is under construction.

The headworks area of MMKJA is located in Uttargaya Rural Municipality ward no. 1. The weir axis is located approximately about 2049.0 m (weir crest level) above mean sea level (amsl). The HRT alignment passes through right bank of the Mailung River which is approximately 1736 m up to the forebay. The powerhouse is proposed on the right bank of the Raman Kholsi just ahead of the confluence of Raman Kholsi and Mailung River in Uttargaya Rural Municipality ward no. 1. At the powerhouse location, the terrace is narrow and the vertical shaft lies just 170 m upstream of the powerhouse location. The entire project components such as headworks, HRT, forebay, penstock, vertical shaft, and powerhouse lie at right bank of Mailung River in Uttargaya Rural Municipality. 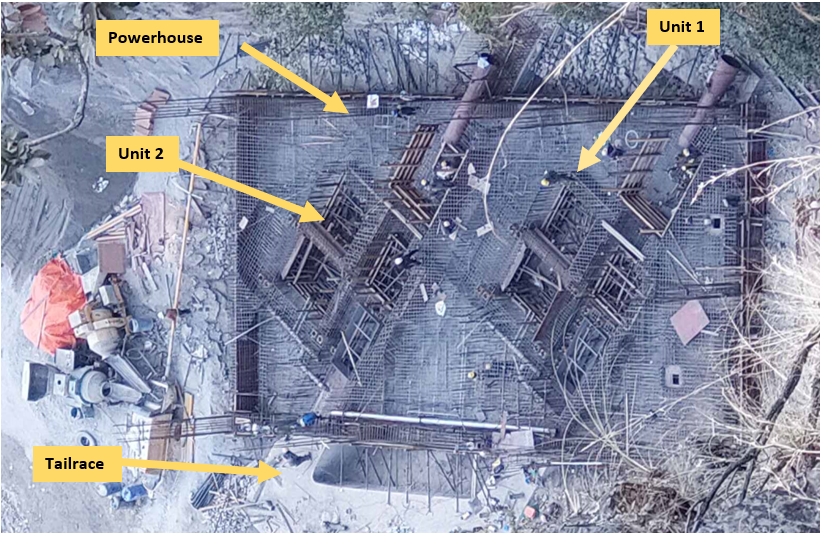